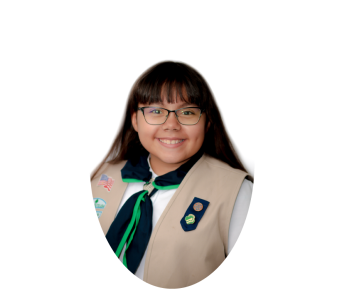 Girl Reporter
Every year, over a 100 million people around the world tune in to watch the Tournament of Roses Parade, while about 1 million are fortunate enough to witness the parade personally in Pasadena, California. This year, I was able to take a peek behind the scenes as a volunteer for both the Girl Scouts of San Gorgonio Council and the City of Riverside.

Do you know why we have a parade filled with roses and other wonderful flowers and plants? In 1890, The Valley Hunt Club was eager to show off the wonderful Pasadena weather to their east coast counterparts. They did this with a parade, showing off the blooming flowers on motorized floats, marching bands, and equestrian units. As the parade grew in size, the Pasadena Tournament of Roses Association was formed and a new tradition was added, the Rose Bowl, which is a college football game. For the last 35 years, there has been Girl Scout Gold Award recipient selected from the Greater Los Angeles Council to carry the parade banner alongside an Eagle Scout. 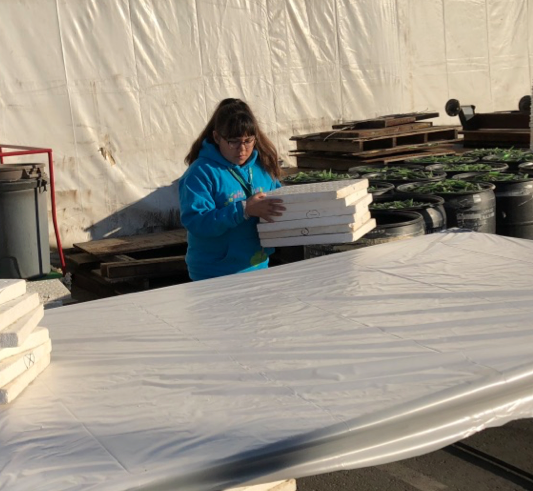 This year, on January 1, 2018, at 8 am there was 20 equestrian units, 20 top marching bands from around the world and 39 magnificent floats decorated with thousands of flowers. The theme was “Making a Difference” and the grand marshal was Academy Awards nominee and distinguished humanitarian Gary Sinise.
Do you know who attaches the flowers to the floats? Volunteers, thousands of them! I encourage you all to volunteer and participate and you just have to be 12 years or older to help. It’s so cool to witness people of all ages help each other make amazing floats. Each of the floats is decorated with natural materials, such as flowers, seeds, and bark. In addition to the many hours to help build the floats, it takes over 80,000 hours and 955 members of Tournament of Roses Association to run the even. It truly takes a team!

The first day I volunteered was on December 2, 2017, along with fellow Girl Scouts of San Gorgonio sisters, along with at least 50 other volunteers from around Southern California. From 8 am to 4 pm, our main tasks were to clean and fill tiny vials with water and place them in foam containers and sort various sized caps to cover the vials based on the width of the flower stem. These little transparent green vials would later hold the flowers to be used on the parade floats. 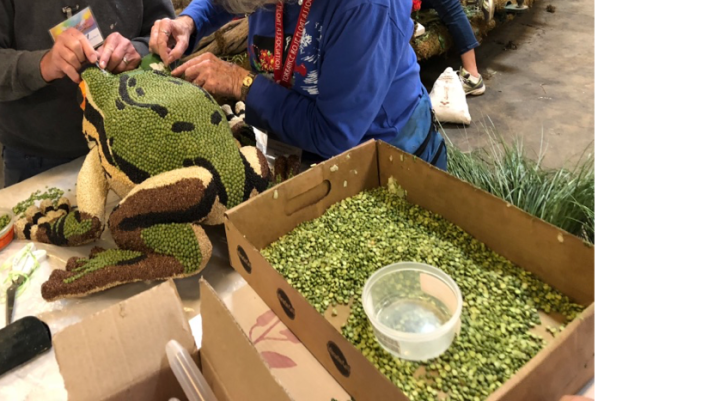 On the second day I volunteered, on December 30, 2017, with proud Riverside City supporters, the float was just about ready for show time to celebrate the Mission Inn and the Festival of Lights. It was a wonderful experience to see all of the floats almost completed and see the fruits of our labor from the previous volunteer day. That day, I saw seven different floats, ranging from cities such as Carson and Torrance to businesses like Kaiser Permanente. All of the volunteers were providing the final touches, like a couple I met who had been helping for over 30 years. They were spending the last day gluing peas to a frog that would be attached to the float. 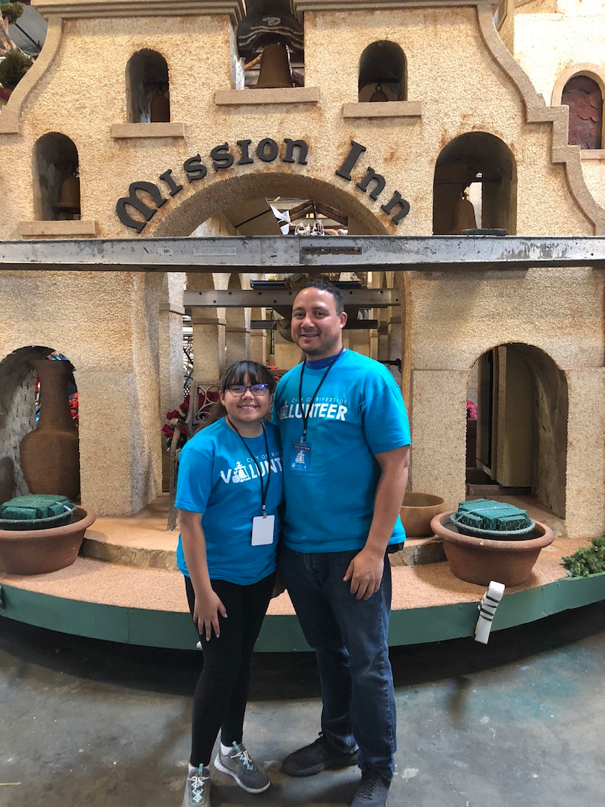 To attend the Rose Parade, you can view from along the parade route on a first come, first serve basis, with seating open a day before. Time to put your camping gear to use! You can also buy tickets to seat in the grandstands for the 2019 parade starting February 2018 at http://www.sharpseating.com. If you are interested in being part of the event as a volunteer, please visit http://www.gsfloatdecorators.com. I hope to see you next year!