After a recent trip to Comic Con in Long Beach, California, I’ve been inspired to read quite a few comics and graphic novels that I discovered at the convention.  One of my personal favorites was “Olive and the Underworld”. I was fortunate enough to meet the both the writer and the artist behind the work, Emily Felt and Laura West. I asked a few questions via electronic mail, and they responded rather quickly.  The two ladies previously mentioned worked on the project together and over the course of two years, even published it. Combining forces, they brought to life a new story and shared it with the world. 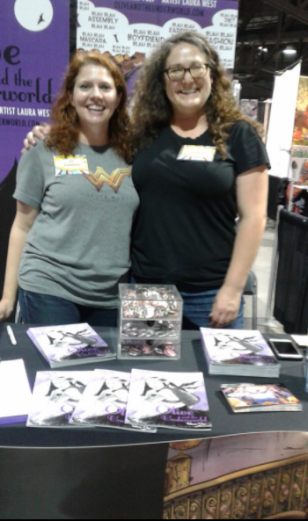 Felt and West hadn’t always known each other, in fact, they met through a mutual friend, Laura Bartak. Bartak was familiar with their work and let the two of them know they’d work well together, seeing as the they’ve already completed a part of a graphic novel, her assumption was correct.  The future wasn’t as far ahead as they thought, and over time the duo created several comics together. Their goal as of now, is to complete vol. 2 of Olive and the Underworld, their “readers are anxious to see what happens,” said Felt. To Felt, the most important thing is “making sure they stay true to Olive and tell her story authentically”, and as long as that happens, they’ll see where their story takes them.

Felt and West each had their own reasons for deciding to work on Olive and the Underworld, but they both committed themselves to the project.  Felt has been a writer and reader ever since she was young, and due to the  “beautiful marriage of visual art and story,” that can be seen in many comics and visual novels.  After taking a class on writing comics, the idea for Olive and the Underworld was born – since then, she’s worked on creating Olive’s wonderful storyline.  When Felt sent the script for Olive to West, she immediately “fell in love with the character,” seeing the lovable characteristics, she could picture herself helping fabricate Olive’s story.

Inspiration is a big factor in almost everything writers and artists do, and for Felt and West, there is not an exception. Seeing as the two are individuals, they have different things that inspire them. Felt is inspired by people who enjoy her graphic novel, it reminds Felt “of all the ways stories were important to [her] when [she] was younger.” Felt wants to inspire others with her work, the same way others inspired her. West enjoyed comics that were relatable, and she thought “the themes of finding home and getting to know people for who they really are [were] something that everyone could find some relatability in.” The idea of a strong female protagonist really appealed to West so she decided to go for it.

With hard work and motivation, these two ladies were able to create something that will inspire tons of girls around the globe. They were able to turn something they loved doing into something successful. They took a risk, which is something not a lot of people are willing to do. They’re even leading their own business without outside help.  Felt and West are two strong females who represent what us Girl Scouts are about, and will continue to show the world this.