Everyone’s heard about Comic-Con but do you really know what all the buzz is all about? Well, this year on September 2 and 3, I attended Comic-Con at a convention center in Long beach. In case you didn’t know, Comic-Con is a place where people come together to celebrate everything in the Comic industry. There are also other costumes of other animated films. Other kinds of booths consisted of clothes, toys, and comics. In these booths, there were clothes such as, T-shirts, hats, and goodies. There were many toys such, as plush toys, bobbleheads, and action figures. There was   also a game booth where you can join a tournament for the chance to win prizes. A lot of the prizes consisted of Rick and Morty collectables, and Zelda items.

My favorite booth was hosted by the author Jessica Therrien. Although I had never heard of her or her books before, this ended up being my personal favorite. Jessica Therrien has a series of books she has written called Children of the Gods. I read only the back of the book, and fell in love with her work. Her books were based towards young adults. She was very kind and explained to me how she was just as shy as I when she was my age. Although I did not talk much, she was very kind to take the time to let me interview her.

My favorite booth for the sales, was first person clothing. This booth was owned and operated by Jason and Samuel Bourlet. I liked their booth because they sold cool wallets, plush animals, hats, bags, and clothing based on many popular character of the animated world. 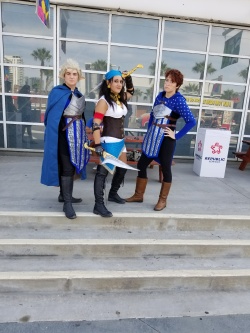 Comic-Con in Long Beach was fun. I saw a lot of cool people. A lot of people were dressed up, so it was really fun to see all of the costumes.  Some of the were really advanced and had voice changers inside of them. If you like comics, and animated films, I definitely recommend this activity. I recommend this for people who like art and cosplay, as well.