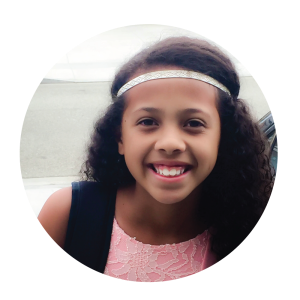 Get ready to suit up… because that’s exactly what happened this past weekend when Comic Con made its debut at the Palm Springs Convention Center, August 26-28, 2016. More than 10,000 people attended this celebration of pop culture and comics. But that’s not all, Wonder Woman also turned 75 this year!

I was excited to talk to the women behind the woman and learn how they helped play a big role in creating Wonder Woman. So many young girls are told, you can’t do that you’re a girl.  Wonder Woman proves those people wrong. This my article on Girl Power!

When entering the convention center, crowds of people were everywhere and there was barely any room to walk without comic fans and cosplayers bumping into you. I saw so many artists paying tribute to Wonder Woman and brave young girls dressed as their hero. 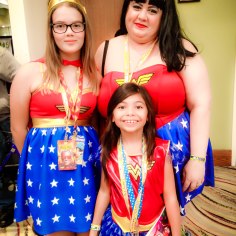 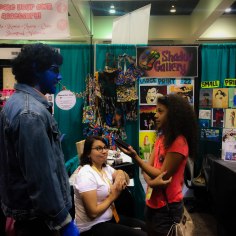 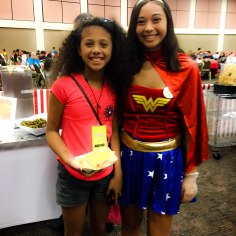 When we walked into the panel room you could feel the excitement in the room. It was supercharged!

Suddenly, there was  a thunder cloud of clapping as the Wonder Woman panelists came in the room. Everyone had so many questions to be answered. I had a bunch of questions, too, and as I was waiting for a chance to ask them my stomach felt all fluttery and jumpy. Despite the nerves settling, I jumped in and started asking questions – after all, we were here to talk about Wonder Woman!

When I asked Cat Staggs, the person who designs how Wonder Woman looks, ‘’Why did you make Wonder Woman so strong?’’

Cat replied, ‘’Women don’t have to be weak to fit in they can be strong, bold, and brave. They don’t have to do what other people want them to be they can stand out and be themselves.’’

I asked Amanda Delbert, the actress who writes for Wonder Woman, ‘’What is a positive message you can give girls from Wonder Woman’s perspective?’’

Amanda said, ‘’ You are strong, powerful, brave, and most importantly you can be yourself.”

I loved talking to them they were very nice and they showed me that woman are strong and confident!

You could really see that they had a lot of love for the parts they play in making Wonder Woman come to life! You could see that love in their eyes and hear it in their voices when they spoke about the comic character. Comic Con was a new experience for me, plus getting the inside scoop on Wonder Woman and being able to share my experience was really super cool!

Comic Con was a really great experience and showed that there is such thing as Girl Power!