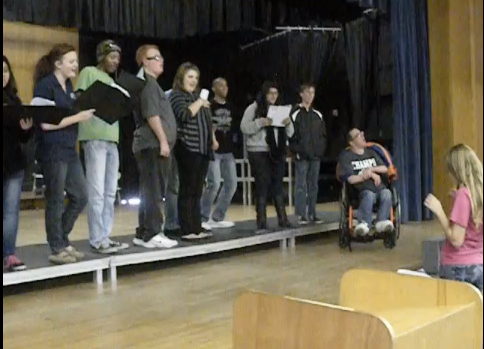 By Laurie Williams, for the Redlands Daily Facts

Like any choir, members of the Redlands High School “Notebusters” needed to let off a little steam at the final rehearsal before their big concert.

“Let’s go craaaazy!” hollered one singer, waving her arms and jumping onto the choral risers at Grace Mullen Auditorium. Other Notebusters heeded her call, turning up the volume on their excitement.

“That’s right,” said director Hannah Rowley, a senior music student at RHS, as the group settled down to get some work done. “We are going to make a lot of noise tonight.”

The Notebusters’ concert, which took place Wednesday night, was the culmination of Hannah’s Girl Scout Gold Award project. With help from members of other campus choirs and from choral director Ken Tuttle, she recruited a dozen singers from special education classes, chose repertoire, rehearsed the group and put on a concert.

She also found out some new things about the love of music.

READ THE FULL ARTICLE ON R.D.F.