Sure, not all girls are interested in getting their hands dirty. But there’s something to be said when that digging uncovers an artifact that’s thousands of years old!

Since October 19 is International Archaeology Day that got us thinking…have you ever considered a career in archaeology? When you think of famous archaeologists, most likely you picture the iconic fiction character Indiana Jones. But who are some real-life female archaeologists and what did they discover?

Born in 1914, Ruth Amiran’s interest in archaeology was developed on walks from her home to the mound of Yenoam in Egypt. On her visits she collected pottery sherds, which she would spread out in the back yard. She would intensely study them looking for similarities and differences between them. Her 1970 book Ancient Pottery of the Holy Land: From Its Beginnings in the Neolithic Period to the End of the Iron Age is a standard reference for archaeologists working in Israel. Ruth’s enormous contribution and legacy, the study of the ancient pottery in the land of Israel, was to prove invaluable for Israeli archaeological research.

Born in 1945, Barbara Adams started her career at age 17 at the Natural History Museum in London. She later became a distinguished Egyptologist. Barbara had an active mind, she wrote poetry and even published a volume of poems titled (1964) Bones In My Soul. Not only highly intelligent, Barbara was also a beauty queen and won the title of Miss Hammersmith in 1964. A local paper described her as, “An incongruous collection of people — beauty queen, anthropologist and poetress all rolled into one delectable form.”  She joined the staff of University College London’s Petrie Museum in 1965 to work with Egyptology Professor Harry S. Smith and got her first archaeological field experience. In 1969 she studied archaeological field method at Cambridge University.  Barbara published her first book (1974) Ancient Hierakonpolis on early excavators Quibell and Green. By 1975, Adams was made an Assistant Curator at the Petrie Museum and produced its first guidebook and by 1980 she was a full curator. 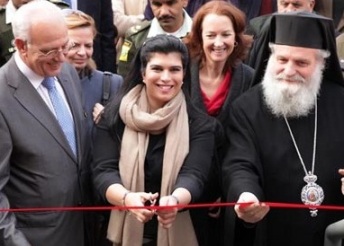 Sumaya is a leading advocate for science as a catalyst for change in the Arab World. And did we mention she’s also a princess?  Jordanian Princess Sumaya is an avid archaeologist and is closely involved with the work of the British Institute in Amman for Archaeological Research and the Council for British Research in the Levant. She is Patron of the Wadi Faynan project, an archaeological excavation in southern Jordan, and she has worked with the Ministry of Tourism and Antiquities on several projects relating to the conservation and development of archaeological sites in Jordan. More recently, under the direction of Queen Rania Al Abdullah, Princess Sumaya was invited to become Vice Chairman of the Board of Trustees of the Jordan National Museum, where she is overseeing the development of Jordan’s first national museum.

Visit Brown University’s Breaking Ground to read more about hundreds of female archaeologists. The database includes women from many countries (both Eastern and Western Europe, Australia, and North America) who were, not only field archaeologists, but also some of whom also taught in universities or worked as museum curators or archaeological artists or photographers.